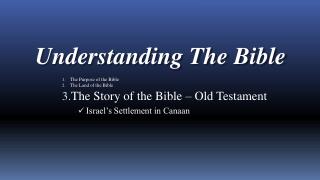 The Purpose of the Bible The Land of the Bible The Story of the Bible – Old Testament Israel’s Settlement in Canaan. Understanding The Bible. Apologetics Question: Was it OK for God to Have the Israelites Destroy the Canaanites Down to the Women, Children and Infants?

Evolution - . our children learn about how things started at home, in bible classes, and in sermons. in schools and