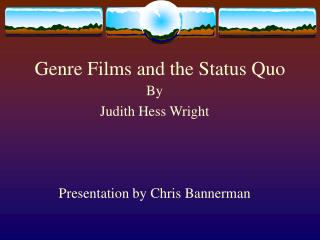 Genre Films and the Status Quo Genre Films and the Status Quo. By Judith Hess Wright Presentation by Chris Bannerman. Purpose of Presentation. To define genre films To analyze there nature in society To go into into their various characteristics To understand their affects on the viewing public. Outline.

Genre Films and the Status Quo

MOVIE GENRES - . categorizing the movies you watch. “zhan-ruh”. the term “genre” is used a lot around the movie

Genre - . a type or kind of literature. why learn about genre?. it is one way to classify literature. knowing the

Hand Hygiene Training Films Instructions - . to use in education sessions for trainers, observers and health-care workers

Genre-Specific Game Design Issues - . action games. the general idea is to keep the player moving and involved at all

Musical Genre Classification - . prepared by elliot sinyor for mumt 611 march 3, 2005. table of contents. what is genre?