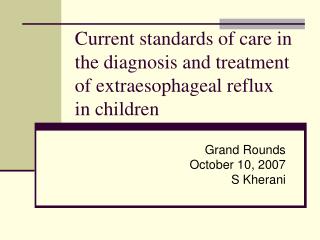 Current standards of care in the diagnosis and treatment of extraesophageal reflux in children. Grand Rounds October 10, 2007 S Kherani. Objectives. Define extra-esophageal reflux disease and differentiate it from GERD Describe the various clinical presentations of EERD

Odynophagia: Causes, Symptoms, Daignosis, Prevention and Treatment - Odynophagia is a state in which the affected person Have you been diagnosed with chronic rhinosinusitis? - . do you have one or more of these symptoms? headaches facial

Treatment and Harm Reduction in Prison and Continuity of Care - . caren weilandt wiad (scientific institute of the german

SPIRITUAL CARE OF SICK CHILDREN - . spirituality and the sick child does it matter?. the challenge to take it seriously.

Treatment Beyond Progression- is there a new standard of care for wt kras ? - . heinz-josef lenz associate director,

REFLUX - . dan will show you how to set up a reaction under refluxing conditions. scroll down. reflux step #1. clamp a

Current standards of care in the diagnosis and treatment of extraesophageal reflux in children - . grand rounds october