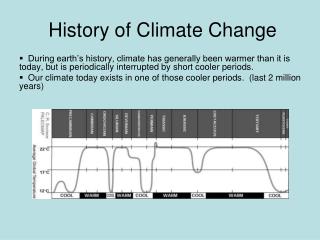 History of Climate Change. During earth’s history, climate has generally been warmer than it is today, but is periodically interrupted by short cooler periods. Our climate today exists in one of those cooler periods. (last 2 million years). Long-Term changes in climate