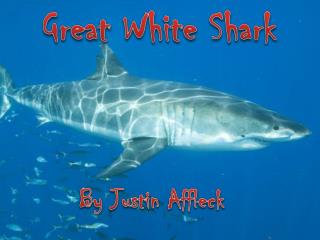 Great White Shark - . by will soldes. introduction. what’s great, white, and eats every thing in sight? the great

Shark Shark what did you eat? - . story and power point by: kristina sica clip art from: www.microsoft.com. shark shark

Great Whites - . friend or foe?. curious and figuring out how to say hi!!!!. did you know that great whites can fly?.

SHARKS Fierce Fish - . power point by: jb. introduction. the sharks scientific name is selachii. a shark is a kind of

Sharks Around Point Reyes - . by liberty and garrett. my name is liberty and i will be sharing facts about great white

Hammerheads and Great White Sharks - . by nadia and ryan f. and mekhi and brandon and jami. introduction. today we will

Sea Life - . miss. shambach 5 th grade science . click on me to continue. lets get started! start by clicking on the name

Great White Sharks - . by n atalie s ipe. body's. grow up to be 20 feet and 6 meters long the toomey is white and the

Great White shark - . scary sharks of the deep. introduction. a great white shark is a type of shark. most people are

All About Sharks - . an abc slideshow. by mrs. madden's 2nd grade spanish immersion students. is for australia. sharks