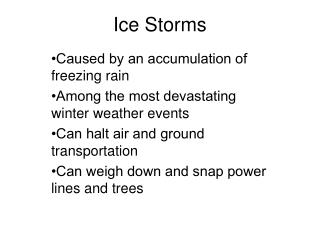 Ice Storms. •Caused by an accumulation of freezing rain •Among the most devastating winter weather events •Can halt air and ground transportation •Can weigh down and snap power lines and trees. Ice storms are associated with. Very cold air Very warm air Stable air Unstable air. Ice Storms - Are brought on by freezing rainfall. when rainfall comes into contact with a freezing cold surface area the

Ice Storms - . by: amy denny science: mr. shepard. what are ice storms?. ice storms are freezing rain that leaves a

Ice Storms - . what are ice storms?. ice storms are a type of dangerous winter storm. the ice they leave can cover

Ice Storms - . •caused by an accumulation of freezing rain •among the most devastating winter weather events

Ice Storms - . by leo. an ice storm is a type of winter storm caused my freezing rain. what is an ice storm?. freezing

Ice Storms: - . unusual weather at its worst! . what is an ice storm. when rain freezes as it falls and lands on the

Ice Storms - . by brandon mitchell tyler luginsland logan woolley. how it forms. ice storms are formed when a warm layer

Ice storms/Hail - . this is a video of a hail storm at its best!!. what are ice

Ice Storms: Natures cold killer - . by: ashton hill science mr. shepard. it covers everything in ice as it hits. nuisance

Storms - By andre . storms . tornadoes . http:// www.youtube.com/watch?v=psajnlbh7ca. what is a tornado? . prior

Storms - . storms. really bad weather dangerous can cause a lot of damage. thunderstorms. f orm when there is a

Storms - . 4.5. storms. storm - a violent disturbance in the atmosphere. all year round, most precipitation begins in the

STORMS - . thunderstorms a disturbance in the earth’s atmosphere that involves lightning and thunder; gusty winds,