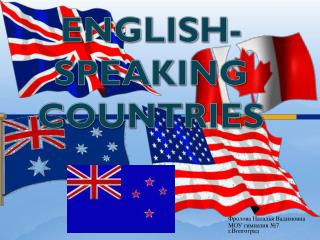 ENGLISH-SPEAKING COUNTRIES. Фролова Наталья Вадимовна МОУ гимназия №7 г.Волгоград. 1. This famous document begins with the words, "We, the people of the ...., in order to form a more perfect union.... Which document? What country?. The Constitution of the USA.

Teaching English as a Second or Foreign Language - . speaking. introduction for communication. the most demanding, and

Integrated Skills in English (ISE) - . syllabus from 1 february 2010. about the exam. different than trinity graded exams

Helene Cixous - . ◎ cixous was born in oran, algeria, to a multicultural jewish family that spoke german and french.