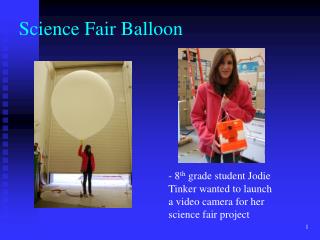 Floating Balloon Centerpieces Melbourne - Do you need floating balloon centerpieces melbourne? bring some magic to your

Junction Hill Science Fair - . a successful science fair project must contain:. where do you begin. variables.

Online Resources to Help You and Your Students Achieve Science Fair Success - . the presenting sponsor of science buddies

Science Fair Project - . mr. gott. problem statement. this is the question you want answered. it should be written as a

Balloon-powered car reflection - . question: how does the material that makes up the wheels affect the acceleration of

What did we Learn from the egg drop experiment? - . mrs. thiry’s 4 th and 5 th grade classes. we were given a

Science Fair Project - . the affect of color on the burning rate of candles olivia alston. statement of the problem . the

CAN COKE AND SALT REALLY BLOW UP A BALLOON? - . lets find out. change. learning intention 3- write and evaluate a