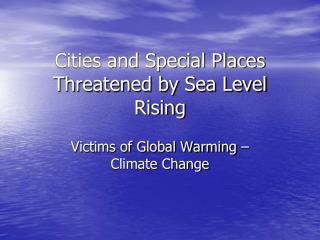 Sea Otters: Adorable but Threatened - . sentinel species at risk due to pollution and over-fishing. by jim fiddes danbury

Special Places - . do you have a place that’s special to you?. maybe it’s in a busy street?. maybe it’s by the

Global Warming and Sea Level Rising: Impact on Bangladesh Agriculture and Food Security - Welcome to the presentation on.

Sea Level Changes - . sea-level change. sea-levels are predicted to rise by 1m this century (by 2100). why?. sea-level

Paleooceanography and Sea-level Changes - . chapter 6. information about past history of the ocean basins comes from