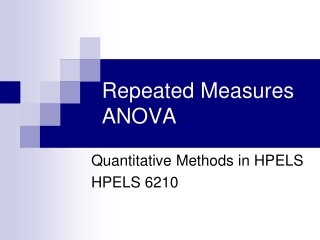 What do you do in a Repeated-Measures ANOVA - The condition of sphericity (denoted as ?) for within subj

ANOVA - . picking the correct bivariate statistical test when, why to use anova summarizing/displaying data -- 1 qual

Variations of ANOVA - . repeated measures anova. used when the research design contains one factor on which participants

Repeated Measures in Statistical Modeling - . anova/linear model assumptions. all observations are independent. all

ALSPAC Data - . measures of childhood incontinence. or, if you’re squeamish…. how many kittens do you own?. repeated