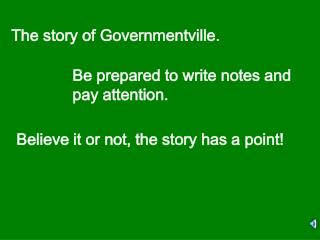 The story of Governmentville. Be prepared to write notes and pay attention. Believe it or not, the story has a point!. The characters for the story include--. Farmer Bill. Milkshake. And some pigs. Let’s begin the story. Imagine a farm in a far away country….