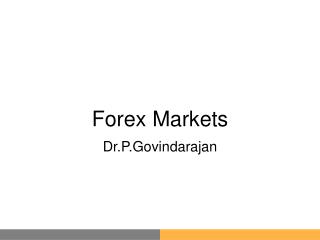 Review of Principles of Microeconomics - . why study economics?. to learn a way of thinking. three fundamental concepts:

The Foreign Exchange Market - The forex market is an electronically linked network of banks, forex brokers and dealers.

Chapter 10 - . identifying markets and market structures. economic principles. the use of cross elasticity to define

C hapter 10 - . identifying markets and market structures. economic principles. the use of cross elasticity to define

MARKETS IN ACTION - 6. markets in action. chapter. objectives. after studying this chapter, you will able to explain how

LMT Forex Formula ??? Is it worth your money - I will admit that i have bought more than a dozen forex trading systems

Foreign Exchange Markets - . objectives: to understand. the organization of the foreign exchange market (fem) and the