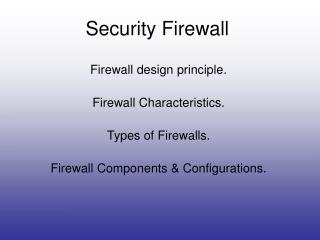 What is a Firewall Anyway? - . what is a firewall?. a firewall is a network security device positioned between two

Guide to Firewalls and VPNs, 3 rd  Edition - . chapter one introduction to information security. objectives. explain the

Security Beyond the Firewall - . “protecting information in the enterprise”. security beyond the firewall. most Firewall 2 - . * essential network security book slides. . firewall basing . it is common to base a firewall on a

Security - . chapter 8. security. security in distributed system can be divided into two parts: a secure channel is a