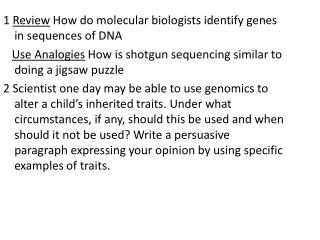 Molecular Biologists - . by: amanda, elizabeth, and abby. how does molecular biology provide evidence of evolution?. all

How Do Genes Work? - . are genes composed of dna or protein?. chromosomes, the known carriers of genes, are made of dna

Genes and DNA - . dna. deoxyribonucleic acid chromosomes are made of dna made of nucleotides. dna shape. double helix

Genes and DNA - . chapter 6 page 144-154. dna. dna-deoxyribonucleic acid. is a molecule that is present in all living

Genes and DNA - . chapter 6. dna fun facts…. nearly 6 feet of dna strands are located in the nucleus of every cell in