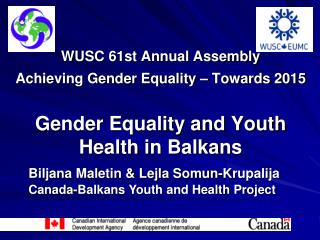 Anyplace Youth Health Survey - . a guide to using the data. how it began. regionalization and rha legislation interlake

The objectives of the FOCUS-BALKANS project - . the general objective are to improve competencies and understanding in

Project co-funded by the European Union - „get on board! mobilising young leaders to support the eu enlargement process

Crisis in the Balkans - . you will be able to relate the crisis in the balkans to: nationalism: imperialism: militarism:.

Waimarino For Youth - . what is wai 4 y and who are we?. what? wai 4 y is a youth needs research project run by youth for

Why were the Balkans a problem area before 1914? - . l/o – to explain the importance of the decline of ottoman power