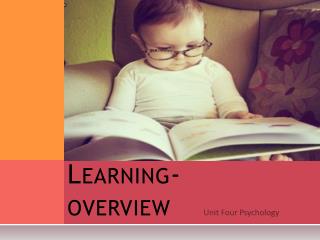 Learning- overview. Unit Four Psychology. Learning. Learning is a relatively permanent change in behaviour that is the result of experience. The three major types of learning described by behavioural psychology are classical conditioning, operant conditioning, and observational learning. Rule Learning – Overview - . goal: learn transfer rules for a language pair where one language is resource-rich, the

DIMENSIONS OF LEARNING OVERVIEW - . framing the learning. write down anything you already know about the dimensions of

Professional Learning Portal Overview - Browse the online modules. sign up for a workshop. find a local workshop and

Professional Learning Initiatives Overview - . professional learning in pcsd. the boe and the pdta are committed to