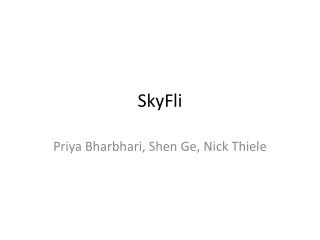 SkyFli. Priya Bharbhari , Shen Ge, Nick Thiele. Company Statement. SkyFli makes the paper plane that can give your money the farthest and the longest-lasting flight. We have undergone extensive tests to ensure only the best reaches the customer. Qualifications.