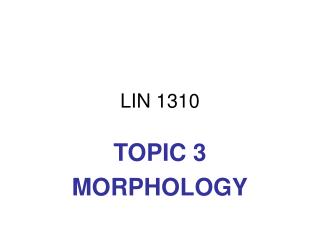 LIN 1310. TOPIC 3 MORPHOLOGY. MORPHOLOGY. Morphology is the study of the structure of words Many words can be divided into meaningful subparts These subparts are not necessarily words by themselves. MORPHOLOGY. Welcome to PHOT 1310 - . digital photography. tamika looks out a bus window. her life revolves around her mother's drug

East LIN - . the demographic imperative in 1970 there were approximately 4.3 working age individuals (aged 20-64) for