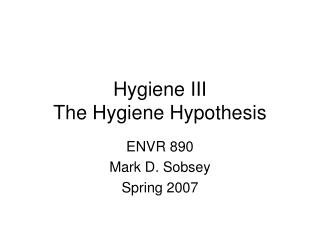 Hygiene III The Hygiene Hypothesis. ENVR 890 Mark D. Sobsey Spring 2007. “Hygiene Hypothesis”. Reduction/lack of in infections and microbial exposures early in life may be associated with increased risk of allergy, asthma and autoimmune diseases Based on observations and speculation on: Antibiotic resistance, the hygiene hypothesis - and the need for targeted hygiene - . sally bloomfield chairman and

Hygiene - . powerpoint 204. what must we do before we cook?. i need to tie my hair at the back of my head. what must you

Hygiene - Beauty, inside and outside. hygiene. by: ruchy schwarzmer marilyn david ivdu upper school ohmyrs@gmail.com. the

HYGIENE - . nature outline phobia effect prevention. neture. hygiene is the practice of keeping your self and your

Hygiene - . from head to toe. hygiene. from the greek word “hygies” meaning “healthy, sound”. what is

Hygiene - . hygiene. personal hygiene refers to the measures that an individual takes to keep their hair, nails , skin,

Hygiene - . from head to toe. knock knock. who’s there? jean. jean who? hi jean! what’s that smell?. hygiene. from

Hygiene - . what must we do before we cook?. what must you do with your hair?. if you have long hair, you need to tie it