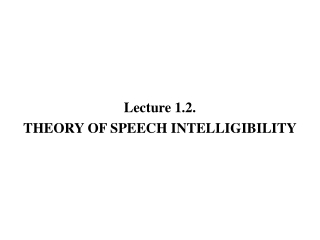 Lecture 1.2 – Development of Atomic Theory - . what was dalton’s contribution to atomic theory?. i. dalton ’ s

1.2 Development of the Cell Theory - . biology. biology is the study of life and living

ACOUSTICAL THEORY OF SPEECH PRODUCTION - . robert a. prosek, ph.d. csd 301. acoustical theory. there is nothing more

Constructive Speech lecture - . ian ritchie. the constructive is unique in that it is the only prewritten speech in pf,