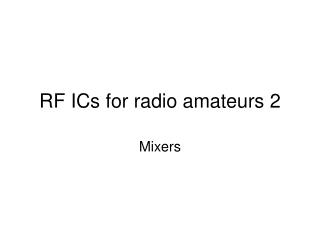 RF ICs for radio amateurs 2. Mixers. Basics and where to find them. http://www.minicircuits.com/appnote/mixer1-2.htm Covers intercept point (IP3), conversion loss, isolation, VSWR, 2-tone 3 rd order IMD – and how to measure them Also for background on the “classic” NE602 : Radio Amateurs of Canada - . a proposal for restructuring of amateur radio in canada. the survey:. in january of 2007,

ÍRA Introduction to Icelandic Radio Amateurs - . introduction made at the nrau meeting in karlsborg, sweden, 10–12

RF Exposure Evaluation for Amateur Radio Operators - Overview. this presentation is meant to be a brief introduction to

Guidance For Buying Guitars For Amateurs - It is preferable not to buy amps right now. save it for your first electric