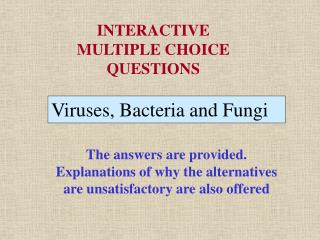 INTERACTIVE MULTIPLE CHOICE QUESTIONS. Viruses, Bacteria and Fungi. The answers are provided. Explanations of why the alternatives are unsatisfactory are also offered.

Protista , Fungi, Bacteria, and Viruses - . protista. a protist is any organism that is not a plant, animal or fungus -

Bacteria and Viruses, Protista, and Fungi - . chapters 22, 23, 24. the new three domain system to which domain is

Viruses, Bacteria, Protists, and Fungi Review - . what is an antibiotic?. medicine used to treat bacterial diseases. what

Germs ( Microbes ) Viruses, Bacteria, and Fungi - . what is a

Bacteria and Fungi - . how do fungi and bacteria cause diseases?. fungi

Viruses, Bacteria, Protists, &amp; Fungi (Part 1) - . classification. one of the jobs darwin had on his voyages was

Viruses and Bacteria - . what do these diseases have in common?. mumps

Viruses and Bacteria - . chapter 18. viruses – alive?. what makes something alive? organization based on cells and dna