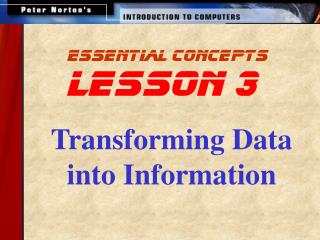 BUSINESS INTELLIGENCE/DATA INTEGRATION/ETL/INTEGRATION - . an introduction presented by: gautam sinha. what is business

3.1 Data and Information - The rapid development of technology exposes us to a lot of facts and figures every day. some Data Cleaning and Transformation - . helena galhardas dei ist (based on the slides: “a survey of data quality issues in

Data Conversion Methods - . sending data from one place to the next  transform data into signals formats of source vs.

Chapter 1 The Information System: An Accountant’s Perspective - . objectives for chapter 1. understand the primary