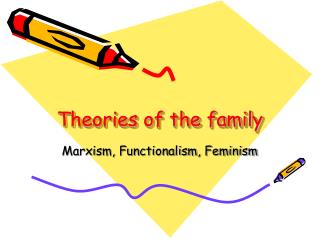 Theories of the family

Theories of the family. Marxism, Functionalism, Feminism. Marxism. Engels (1972): The family arose in response to the development of private property and for men to pass this property on to their offspring Thus he saw the main function of the family as the reproduction of the capitalist system

Theories of the family

Summary of Life Course Theories - . (a.k.a. the developmental theories). these theories. three categories of life course

V Unit DIVIDEND THEORIES - . dividend decision determines the amount of earnings to be distributed to share holders and

4 Theories of Art - . 4 theories of art. “art is not a mirror to reflect reality, but a hammer with which to shape

Studying Marriage and the Family - . theoretical frameworks for understanding families methods and techniques in family

Theories of Forgetting - . theories of forgetting can be difficult to test as we may in fact not forget, but have trouble