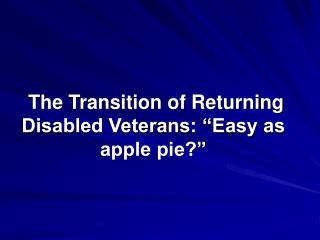 The Transition of Returning Disabled Veterans: “Easy as apple pie?”

The Transition of Returning Disabled Veterans: “Easy as apple pie?”

Rewards and Sanctions in Veterans Treatment Court - . some returning veterans suffer from invisible wounds. of the more

Helping Our Veterans: What We Can Do - . resilience and achievement. classroom challenges. from combat to college.

Maureen Burrell Transition Pathway Co-ordinator - . aim. by 2010, all disabled young people in birmingham should have a

Veterans Outreach and Transition Assistance - . david blair, director of veteran and military affairs, the university of Veterans Day - . by: angela greathead. about veterans day. the purpose of veterans day is a celebration to honor