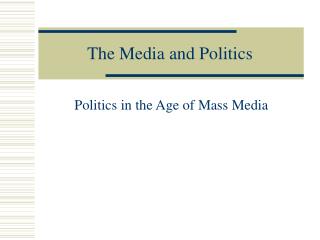 The Media and Politics

The Media and Politics

The Impact of Political Systems on Global Media - . by: andrew haveles 2b. introduction. the media is growing

Effects of Social Media on Political Awareness and Participation - . a study on students and politics by: kristina

Arts and Media: Media Bias - . objectives: to understand what the terms ‘media’ and ‘bias’ mean to discuss the

COM 517 COMMUNICATION IN POLITICS Media Effects - . media effects and political communication: the impact of media on

How does the media connect Canadians to their government? - . how does the source of your news affect the information you

The Mass Media and the Political Agenda - . chapter 7. high-tech politics. politics that are shaped by technology. mass

The Mass Media and Politics - . chapter 7. into the thick of it. what do we typically see on political talk shows? what

Different strategies in the use of Social Media in Political PR - Euprera spring symposium ghent – 25/27 february,