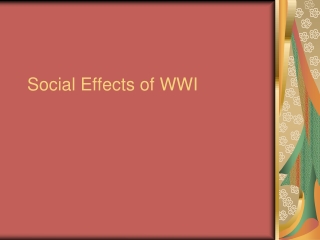 Social Effects of WWI. Social Effects During the War - Disillusionment. Most had gone to war in 1914 believing in heroism and nobility Trench warfare and the wartime experience changed these feeling to anger and disbelief

Day 2 – Social and Economic Effects of the Spread of Communism - . directions: - use this power point to complete the

Casualties of War - . america at war. how can the victor of a war be determined?. new form of government is in place.

Social Effects of WWI - . social effects during the war - disillusionment. most had gone to war in 1914 believing in

Which effects of WWI became causes of WWII? - . the rise of dictatorial regimes. big ideas. which leaders became

World War I - . marching toward war . rising tensions in europe the rise of nationalism by 1907 europe was split into two

Brave New World - . by aldous huxley. two worlds collide. post-world war i world was a suffering the effects of carnage