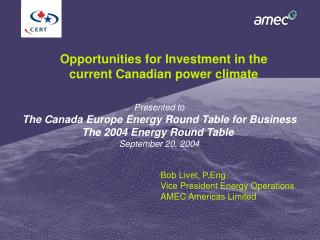 Opportunities for Investment in the current Canadian power climate

Opportunities for Investment in the current Canadian power climate

The Investment Environment - . p.v. viswanath for a first course in investments. learning goals. distinguishing between

The IPV Energy Companies - . a leading investment opportunity in the energy sector…. a welcome from the chief executive

The Economics of Energy Efficiency – Why It Makes Sense For Canada - . presentation to the canadian energy efficiency

The India Opportunity &amp; Business Environment 2012: What it is? What are the Challenges? How to Get Involved R

Investment Opportunity and Challenges - . ultra mega power projects. navin wadhwani. afg. may 200 6. “ if you are a