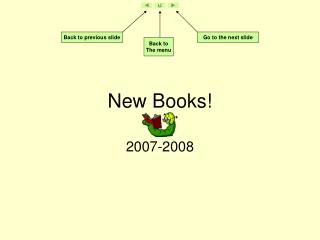 Back to previous slide Go to the next slide Back to The menu New Books! 2007-2008 Supernatural Books Vampires, Fairies, & Ghosts, oh my! Reality Real teens in difficult situations Historical Fiction (not true) books based on real historical events Mystery mystery books

New Exclusive Oilfield Tally Books - Built to last, this vinyl entrapment tally book is available with either a 200 page

New to You Books Oldies but Goodies - . the thieves of ostia by caroline lawrence. if it’s not the dogs, who are the

Reference Books - . reference books are those which are consulted for a specific fact or for information on a definite

Bible Books - . books of the bible. you’ve seen the peaks and valleys, but what else is there to know? your bible

Picture Books - . by sebastian, evy, oscar. by graeme base. uno’s garden by g raeme base (combined). “the cover of

New Books in our Library - . available now!!!!. emily eyefinger. we have the complete series of these fantastic books!.

NEW BOOKS For you! - Check it out!. new books for you!. between here &amp; forever by elizabeth scott the warlock by

Books at the Harvard Depository have a life of their own - . they live comfortably in the cold storage of the

Please have the following things on your desk: 1. Reading journals and books - 2. a pen or pencil 3. assignment pad

How to cite books and songs - . summer reading assessment: novel soundtrack. how to cite a book. author’s name. title