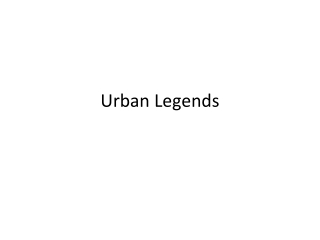 Urban Legends. Do-Now:. What is an urban legend? Can you think of any examples?. Urban Legends. (n.) a modern story of obscure origin and with little or no supporting evidence that spreads spontaneously in varying forms and often has elements of humor, moralizing, or horror

Urban Legends - . myths. religious origins from the past explain the origins of life or define cultural values may be

URBAN LEGENDS - . investigating a modern form of folkore as the basis of dramatic communication. key characteristics of

URBAN LEGENDS - . have always been around internet has magnified their influence. 3 types of rumors that emerge following

Urban Legends - . the warehouse madrid upper intermediate class. pass on. to pass on a message is to tell somebody a

Urban Legends and You