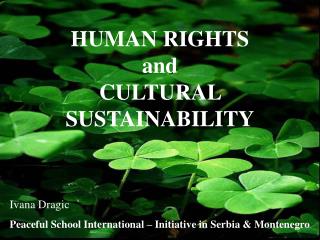 Democracy, Human Rights, and Human Development - . paul bacon sils spring 2010. what we have done so far. we studied two

What are the current challenges on Earth? - African youth leadership, sustainability and ethics course session #2 – the

Human Rights Activism and The Arts - . agenda. about the human rights project introduction: why the arts and human