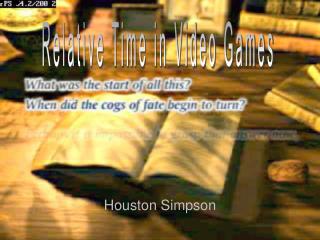 Relative Time in Video Games Houston Simpson Time We all have heard the phrase “Time flies when we’re having fun,” but what does time really mean?

Hurricane R ita - . by: felix r ojas, shonadae lovato, and monica montoya. about hurricanes. hurricanes are big, and they I. Hurricanes A hurricane is 1 . The largest, most powerful storm - 2. an intense area of tropical, low pressure 3. a

Cultural Geography – Popular Culture As Global Culture - . except as noted, all photos by dale lightfoot dale

TEDA in Houston March 24, 2011 - Population change in texas: implications of the 2010 census for education, the labor