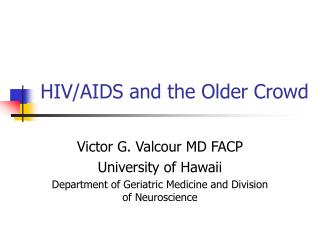 HIV/AIDS and the Older Crowd. Victor G. Valcour MD FACP University of Hawaii Department of Geriatric Medicine and Division of Neuroscience. Overview. Understanding HIV and aging is in its infancy Review of literature Outcomes, toxicities, response to HAART

Chapter 32 Geriatric Emergencies - . objectives. there are no 1985 objectives for this chapter. geriatric assessment.

Orthopedic Considerations in the Older Adult - . what to worry about in the old folks!!!. topics to cover and relate….

Ethical and Legal Issues in the Treatment of Older Adults - . ricardo perez, do, jd assistant professor of medicine

Growing Older In America - Mild and major cognitive impairments in the elderly: diagnostic considerations and

Syncope and The Older Patient - . debra l. bynum, md division of geriatric medicine. pretest…. 1. the ecg has the

Adult Development Theory: An Overview - . rationale. most adult development theory does not specifically treat the issue