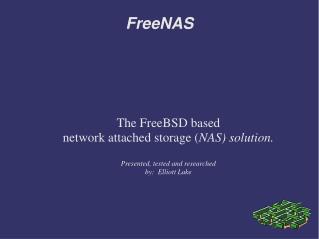 The FreeBSD based network attached storage ( NAS) solution. Presented, tested and researched by: Elliott Lake FreeNAS What is a NAS? Consider a NAS server to be: A network attached device with: A self contained O/S. One or more mass storage devices shared over the network. Examples: