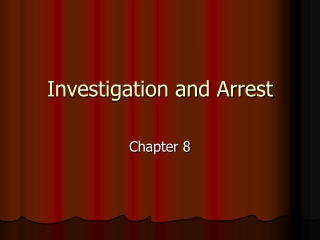 Investigation and Arrest. Chapter 8. In this chapter we will look at…. The Police The Investigation The Evidence The Arrest and Detention. The Police. Canada’s Federal police force is the Royal Canadian Mounted Police or RCMP.

Investigation and Arrest - . chapter 8. in this chapter we will look at…. the police the investigation the evidence the

Police and the Courts: Investigation, Arrest, and Adjudication - . chapter 17. objectives. be familiar with the role of

Legal Aspects of Criminal Investigation: Arrest, Search and Seizure - . detention vs. arrest. detention: a temporary and

Betrayal and Arrest - . october 18. think about it …. “when you betray somebody else, you also betray yourself.”.

- Arrest - - . arrest. takes place when a person suspected of a crime is taken into custody. can occur one of two ways:

Arrest - . when police place someone under arrest, they have to follow certain rules to ensure that the person’s

ARREST - . requirements for a lawful arrest. every person, including a child who is arrested for allegedly committing an

ARREST - . arrest. the responding officer must arrest the suspect whenever an arrest is mandated. mandatory/pro arrest.