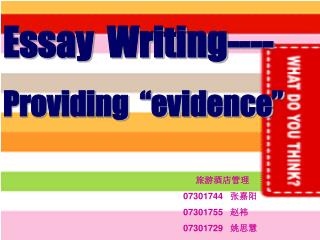 The Essay: The What and the Why - . “what do you think about school uniforms?”. what vs. why identification vs.

EXAMPLE ESSAY - . characteristics. also known as : illustration essay or illustrative essay not as in drawing or

IEP Development: Goal Writing - . 2009-2010. agenda. welcome presentation on goal writing and how it is connected to the

WRITING A DBQ: AP * U.S. History - . what is a dbq?. an essay question that asks you to take a position on an issue that