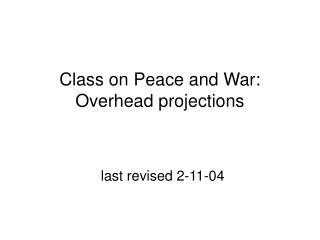 Class on Peace and War: Overhead projections. last revised 2-11-04. Factual question from prior class (about wealth and global justice) that I found the answer to and might be part of this discussion today as well:.

Possibly for me or me peace is no war, - . no harm, no violence, no fights and . only peace and happiness and

Peace - . but the fruit of the spirit is love, joy, peace, patience, kindness, goodness, faithfulness, gentleness,

Look over these notes, but I’ll go trough this material on the overhead in class - It explains the extra credit

Peace in my eye - . i was in the united nations peace p oster contest last year. the topic was “i magine p eace”, so

Welcome to - . st. philip cedar. www.stphilipcedar.ca. welcome and celebrations. peace. a candle is burning, a candle of

THE QUEST FOR PEACE - . the quest for peace. men are created to live in harmony we are designed to seek peace in order to

Variance Analysis - . overhead variances. when working through this powerpoint slide show, make sure you have a copy of