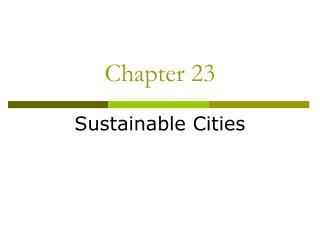 Chapter 23 Sustainable Cities Core Case Study: The Ecocity Concept in Curitiba, Brazil 70% of Curitiba’s 2 million people use the bus system. Only high-rise apartments are allowed near bus routes and devote the bottom 2 floors to stores. Bike paths run through the city.