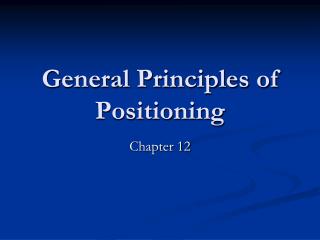 General Principles of Positioning. Chapter 12. Terminology. Caudal : Parts of the head, neck and trunk positioned towards the tail from any given point. Also aspect of limbs above the carpal and tarsal joints that face the rear of the animal. How to Choose the Best General Dental Clinic in Vancouver? - At dentist vancouver city, we give extensive general

General Principles of Massage - . definition of massage . recreational massage: the use of a variety of manual techniques

Post-Modern Principles of art - What is post-modernism