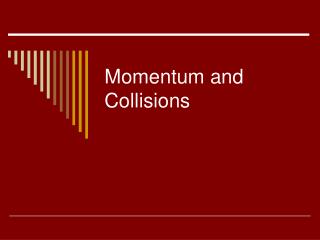 Momentum and Collisions. Conservation of Momentum. Momentum is Conserved. So far we only have considered the momentum of only one object at a time. Now we will look at two or more objects interacting with each other. Picture this. . . Momentum - . what is momentum? p = mv how does momentum change? (impulse) ‏ i = mΔv = fΔt quiz ! conservation of

CONSERVATION OF LINEAR MOMENTUM - . chapter 20. objectives. know that linear momentum is conserved when no outside forces

Section 6 – 1 Momentum and Impulse - . momentum (p). a vector quantity defined as the product of an object’s mass and

9.8   Momentum and Kinetic Energy in Collisions - . the linear momentum is conserved for collisions in a closed and