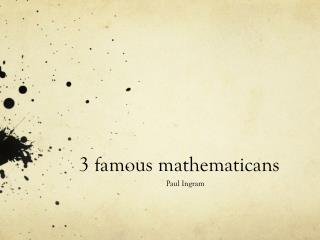 3 Mathematicans - By: tanner hensley. 3 mathematicans. aryabhatta. born 476-550 in india he advanced in arithmetic,

Mathematicans - By: cameron wells. mathematicans. pictures for days. pythagoras. considered to be one of the 1 st great

3 Famous Mathematicians - . by:garrette peck. basic info over aryabhatta. he was born on 478 he died on 550 he was born

3 famous mathematician's - . by: caitlin warfield . a ryabhatta. aryabhatta. he was born 476ce at patliputra in magdha he

Quotes by 3 famous people - . made by j ack n airn. donatella versace: . creativity comes from looking for the

Famous Quotes…. by Famous Professors - . … fondly remembered by cohort #5 the college of new jersey. “this