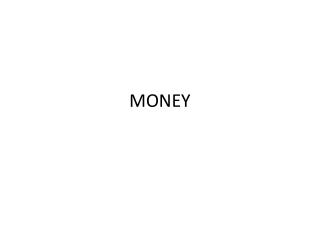 MONEY, MONEY, MONEY - . where does the money come from? the students’ union is a non-profit making charity the union

Money, Money, Money! - . by emily kerg. purpose: to use addition to find the value of coins when added together.

Money Money Money - . 1. two kinds of organizatons. some have a financial surplus. these organization have the resources