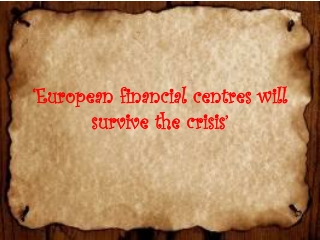 European-financial-centres-will-survive-the-crisis%E2%80%99# The Summit on the Global Agenda is the world’s largest brainstorming meeting attened by thought leaders of the World Economic Forum’s Network of Global Agenda Councils. The Financial Crisis: Why Did the U.S. Economy Meltdown? - . overview. a refresher on financial markets the crisis