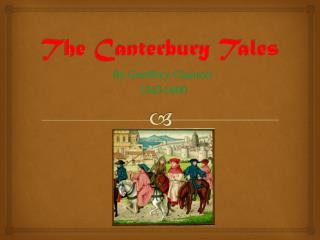 Tales of a Fourth Grade Nothing - . jeopardy. enjoy the review game and treat the judge with respect. listen carefully

The Ch’i-lin Purse - . linda fang. bell ringer. what are some wedding customs you are familiar with? gifts? attire? the

Metaphors in Fairy Tales - . reminder: definition of metaphor. a metaphor is a writing strategy in a metaphor, something

The Canterbury Tales - . by: geoffrey chaucer. “and specially from every shires ende of englelond to canterbury they

The Prologue to The Canterbury Tales by Geoffrey Chaucer - . feature menu. introducing the selection literary focus: