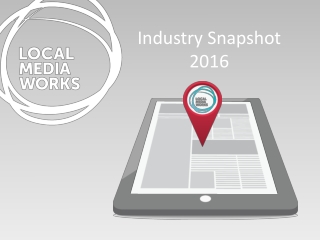 Industry Snapshot 2016. A cross-platform medium. Local newsbrands , in print and online, are among the UK’s most popular media, reaching 40 million people every week 28 million frequently (4-5 times+ a week) read local media via print, online or through an app Snapshot - . what do you think of when you see the words: scientific method k w l. ls.1 scientific

Snapshot - . it takes…. per student to make the following possible:. how are your $$ used?. $60. student enrichment:

Snapshot - . write out and answer these questions: what symbols do you see in this political cartoon? who do you think

Distributed Snapshot - . -- how many messages are in transit on the internet? -- what is the global state of a

CURRICULUM Snapshot - All about what children learn in and through their truthbooks . curriculum snapshot. in this

Instantaneous snapshot - What to look for when reviewing a mixing zone study in wa. epa mixing zone webinar workshop