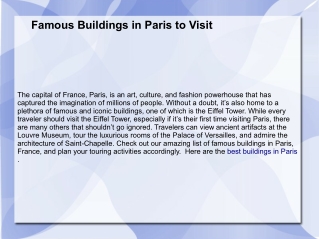 Paris - . by natalie farina. paris is none for there art. croissants. there are a lot of croissants in pairs. places to

Paris - . presented by: austin gold project 6: planning your dream vacation 3/12/10. climate. in paris during the spring

Paris !!! - . by dominique wheeler. paris foods . mailto:bill@parisfoods.com. this is some pictures and information on