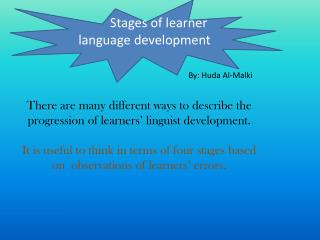 1st Language Acquisition - . how do humans acquire speech?. language acquisition. we are not born speaking! language must

Stages of Development - . to know the stages of development, and their associated characteristics. to understand that

Stages of SLA - . students and their teachers . the second language learner and the language acquisition process. stages