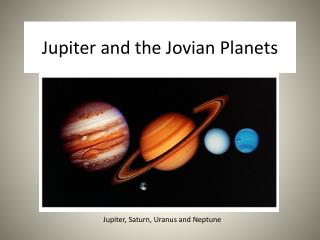 Jupiter and the Jovian Planets Jupiter and the Jovian Planets

The Planets - . planets and the sun: two groups and pluto. terrestrial - with a solid surface; jovian – gaseous

Extrasolar Planets.I. - Extrasolar planets.i. what do we know and how do we know it. basic planetary atmospheres

Outer Planets - . outer planets. the outer planets are called jovian or jupiter-like. m ade of gas and are several times

JOVIAN (GAS GIANT) PLANETS - . jupiter: king of the planets. it’s got more than twice the right stuff (mass, that is)

Outer Planets - . the outer planets are called jovian or jupiter-like. these planets are made of gas and are several

JUPITER - . facts about jupiter. jupiter facts. jupiter rotates so fast that the days only take 10 hours. a jovian year

Chapter 7 : Mentos - . chapter 7 the jovian planets. units of chapter 7. observations of jupiter and saturn the

The Planets - . adam caughhorn mary felton melinda michael. the solar system. the sun is a star. there are 8 planets.

The Planets - . science for teachers. introduction to the planets. a. two groups of planets. 1. inner planets --mercury,

THE planets - By micah segura-mitchell. the planets. named after the roman “king of gods”. interesting facts about

Jupiter - . by lexy. jupiter. where is jupiter? it is behind the asteroid belt. so big that all nine planets could easily