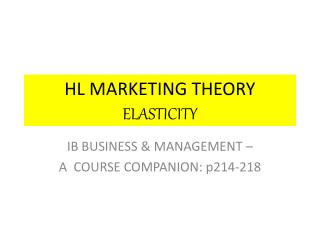 Marketing 333 - . chapter 10 product concepts. what is a product?. a bundle of benefits what the buyer gets…not what

Demand, Supply and Price Theory - . week 2. recap. what is opportunity cost? why are incentives important to policy

Price Elasticity of Demand - . dp economics. the concept of elasticity. elasticity is the measure of responsiveness in

Elasticity - . what is an elasticity?. measurement of the percentage change in one variable that results from a 1% change