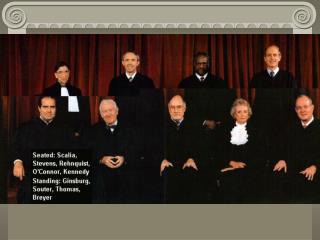 THE JUDICIARY - . early days of the supreme court. the founders expected that the courts would have “ judgment ”

Fall Semester Exam Review - . 1. the supreme court case which established the power of the court to declare a law

Issues of Suggestibility &amp; Court - . overview. what is suggestibility? research – past &amp; present

Plessy v. Ferguson - . 1896. explain how the supreme court justified the practice of segregating railroad passengers in

Court and Adjudication - . structure of american courts management of courts to be a judge prosecutorial systems defense